I was lucky enough to get tickets for both of the London shows on the first Tin Machine tour and both shows were fantastic. I don’t think anyone could believe they were seeing DB in such small venues since last time he had played in London it had been at Wembley Stadium. Both shows were packed out and the band played hard and fast – it was like seeing the Clash in 1977. I remember them being a lot better live than their records would suggest. There is a CD with the 2 London shows on called Live Machination. 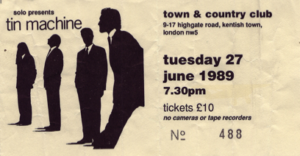