This show was straight after the Meltdown Festival so a lot of fans were hoping he would do the full ‘Low/Heathen’ set. There was a massive thunderstorm an hour before the show followed by heavy rain so that put paid to any ideas of an extended show. He did his best though but the weather definitely ruined what could have been a special show.

The support acts were Divine Comedy and Suede; neither were very good. There are several recordings of this show. 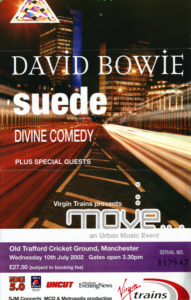 I Would Be Your Slave

I’ve Been Waiting For You