This is the only time that I have seen Bowie play in the place where I have been living at the time. This was his first – and last – show in Sheffield since May 1973. Unfortunately it wasn’t a memorable one because it wasn’t sold out and Sheffield Arena is a really crap venue so not much of an atmosphere. There were supposed to have been two nights here but one was cancelled fairly early on when it was clear there wasn’t much demand.

The ticket says Morrissey played but he had left the tour earlier and there was no support. 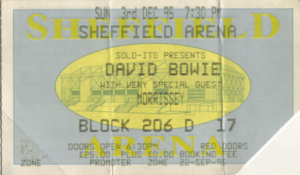 A Small Plot Of Land

Look Back In Anger

The Voyeur Of Utter Destruction

I Have Not Been To Oxford Town

The Man Who Sold The World

Strangers When We Meet