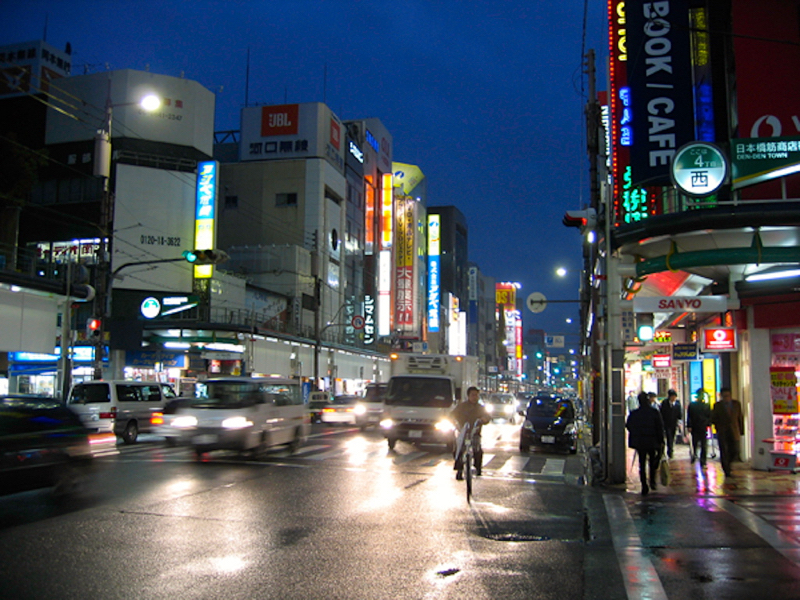 It is a wet morning in Kyoto so I go to the station and get the bus out to the museums area but unusually they are all shut at the same time. It doesn’t look like drying out soon so I walk towards the zoo but then I see a sign for the ‘murin-an garden’ and decide to go and see what is in there. In true Japanese fashion it is completely hidden away behind a wall and fences and I walk right round without seeing the entrance. I pay my 400 Yen to get in and as soon as I walk through the door I am transported to another older Kyoto. There is no traffic noise even though there is a busy road junction outside but I can hear the monkeys chattering away high in the trees above the zoo. The gardens were built by a prominent Japanese politican in the 1890s and the tea house provided a place for meetings with visiting diplomats and local dignitaries. The garden is laid out with a stream running through it on three levels and all of the lawn area are actually covered with moss which is almost certainly trimmed regularly by a gardener with a pair of scissors.

Murin-an is a perfect example of a promenade garden where the layout is designed with rises and bridges so that wherever you stand you can see all of the garden. After walking round the whole garden you come back to the tea house where the guests and hosts would have taken their tea ceremony. You can still hire the tea house for some traditonal tea-drinking and as I left a group of Japanese ladies in full traditional costume came in to do exactly that. Stepping out of the garden into the street felt like someone had turned on the sights and sounds of a busy city again.

Next stop was the Kyoto International Manga Museum in Karasuma-oike. Some say that manga developed as long ago as the 13th century as a way of documenting traditional and new stories for an audience whose literacy levels were low; others say that it is an entirely modern phenomenon that grew after 1945 under the influence of American comic books. In this quiet suburb the owner has established the first comprehensive library of all published titles – some of which are extremely rare.

On a busy afternoon the museum is heaving with families and kids but by no means are all the visitors under 10 ! There are manga drawing classes going on using both hand-drawn and computerised work and there is a long queue to have your picture drawn by one of the resident artists. The core of the building is a huge library called the Manga Wall with over 300,000 of the distinctive paperback books in neatly-ordered rows. There are kids everywhere sitting on benches, windowsills and staircases and the whole place is silent as they are lost in concentration on their books. Once finished the books are put book exactly where they came from and all are in immaculate condition with no scribbles or folded corners. Another haven of peace in a busy city and on the way out I buy my souvenir postcards from a girl with purple furry ears.

error: All material on this site is copyright Robin Jeeps 2022.